When you read mechanics, you will hear the words “uniform velocity” or “constant velocity“.

These two words mean the same thing. That is, constant velocity is called uniform velocity. There are many concepts of mechanics hidden in this Uniform Velocity word. So, in this tutorial, we will discuss in depth about constant-velocity through graphical representation.

How is the vector constant?

When you use a scalar as a constant. In that case, only the value of the scalar quantity needs to be kept unchanged over time.

Constant velocity is the velocity that a particle acquires as a result of a particle crossing an equal linear path at certain time intervals.

Also, you can say that the constant speed of a particle along the same straight line is uniform velocity.

That is, the particle will travel an equal linear path at equal time intervals. So, look at this figure below

That is, the slope of the migration-time graph represents the uniform velocity.

This graph has been discussed before. And displacement will increase at an equal rate in respect of time. However, the slope constant will remain. 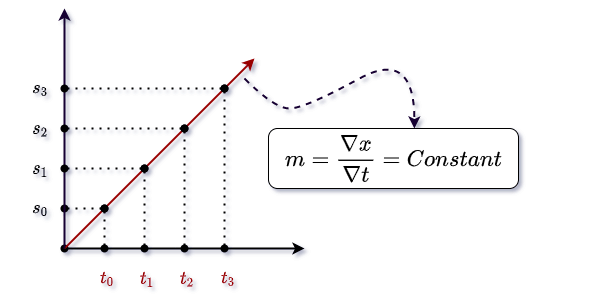 The value of velocity will not change with respect to time. So look at this graph below as time moves forward but the velocity remains the same. 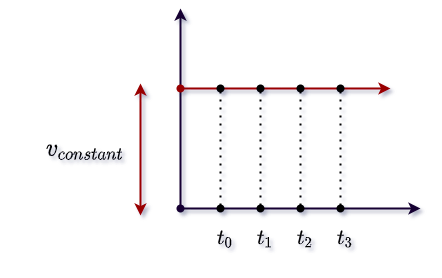 Here since velocity is constant. Then the acceleration of the particle will be zero. That is, there will be no change in velocity in respect of time. 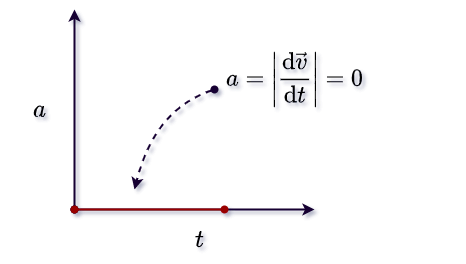 “Why does an object move in uniform velocity?” To understand that, you need to understand Newton’s formulas analytically and mathematically. Where the Applied Force has been discussed in depth.

Primarily, the concept of uniform-velocity comes from force.

You probably all know the concept of Newton’s first law. Where Uniform Velocity is discussed. Newton’s first formula describes two physical states of an object.

We will discuss the dynamic state of the object here. And you see how an object moves in constant velocity?

If the total external applied force on a moving object is zero then the object will move in uniform velocity. To prove this concept mathematically you need to take the help of Newton’s second law. Where the definition of force is given.

Finally, we can say that if the applied total external force on a moving object is zero then the object will move in uniform-velocity.

Questions and Answers on Uniform velocity

Below is a discussion on some questions and answers on uniform velocity.

Problem1 Notice in this figure below, here a particle is moving in a circular path with constant speed. In this case, will the velocity of the particle be constant? 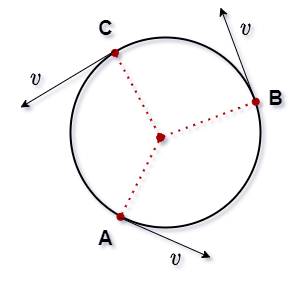 Thus, even if a particle moves with constant speed in a circular path, it will not move with uniform-velocity. 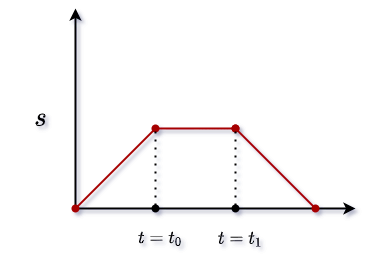 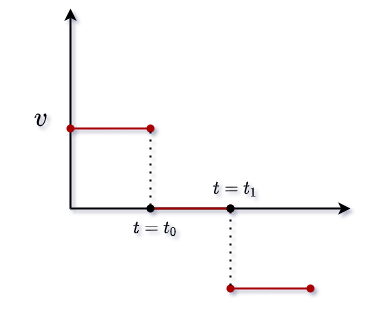 Problem3 How do you calculate total displacement with a graph of uniform velocity and time? 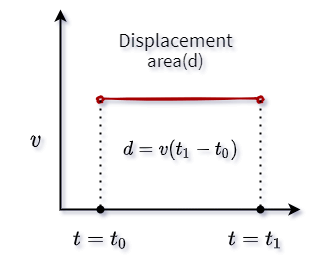 Problem4 When can you treat Uniform Speed ​​as Uniform Velocity?

Uniform velocity has an unchanged direction. So, when a particle is moving along a straight line with uniform speed, you can call its speed as uniform-velocity.

Problem5 If a particle moves in uniform velocity, what will be its acceleration?

Also if you do a derivative of a constant the result will always be zero. Then

Here uniform velocity and constant velocity are two of the same words. Many people are very confused about this. Of course, the concept will be clear after this tutorial. And if you have any feedback, let us know in the comment box.

And if this tutorial has added some value to your education life, don’t forget to share this tutorial. As a result, I get motivation to create better tutorials. Thanks, All Physics Lover