Simply put, in mechanics, the system of particles is the sum of more than one specified particle. So, look at this figure below 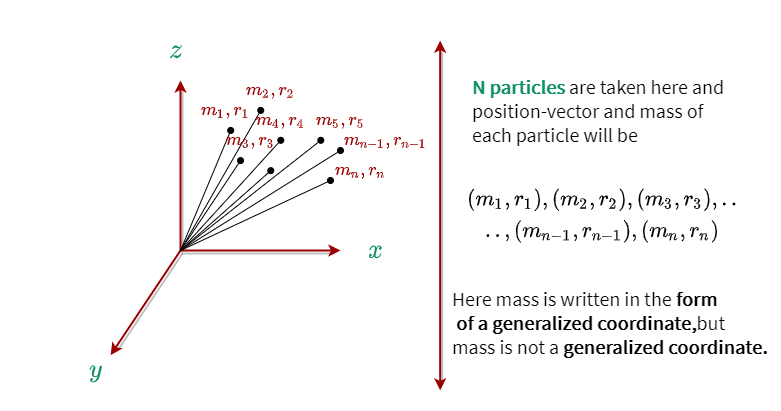 Here we have taken N particles. And the mass of ith particle will be mi and the position vector will be ri.

Why systems are needed in Physics?

When you read physics, you will hear the word ‘system’ many times. Many of you may have a question in your mind as to why more than one object or particle in physics is considered a system!

We took n particles according to the question. And suppose, every particle is under gravity. In that case, you don’t have to use any system to calculate the force. Because you know the value and direction of the applied force on each particle. In this case, you can easily calculate the total force

Because force is a vector quantity. And in this case, the direction of the force of each individual particle will be different. So, there will be a total applied force on N particles …

Thus, it is impossible to calculate the force by considering each particle independently from the above equation. In this case, you have to treat the particles as a system.

You need to remember that there is a point in the system where all the mass of the system is centered. Which we know as the center of mass. That is, if you apply a force at this point, the linear motion of the system will be created.

For this, the aggregate of more than one particle is always considered as the system of particles.

Generalized Coordinate of Systems of Particles

The minimum number of independent coordinates required to describe the configuration of a dynamic system at any given time is called generalized coordinates of that system.

Suppose you take a dynamic system of N particles, in which case you will need a minimum of 3N generalized coordinators to describe the configuration of the system.

If the constraints above the system are k, then the system will have total generalized coordinates

For example, suppose a constraint is applied to a system so that every particle in the system will move on the surface of the sphere. In that case, the system will have generalized coordinates fk=2N( ∴ f=N ).

Because when the particle moves on the surface, there will be constraint equation

There is a question among many as to how the Cartesian coordinates are written in the form of generalized coordinates.

External force and torque on the Systems of Particles

When external force and torque are applied to a group of particles, three types of motion can be generated in this system.

1. If a force is applied to the center of mass of a system, the system will generate linear motion.

2. Rotational motion occurs when pure torque is applied to a system. Here pure torque means that the total external force will be zero i.e. the system will not have any linear motion.

3. Mix motion will occur when both external torque and force are applied to a system.

So, below we will discuss the causes of these three types of motion.

Suppose N particles are present in the system. According to Newton’s second law, there will be a total force on the ith particle

Since there are many particles stored in this system. The internal force will work among them. There will be a total internal force on the ith particle $\sum F_{ji} $.

In the case of N particles, there will be an equation of system motion

Then the external force will be the only reason for the motion of the system.

And you can write this equation as the center of mass of the system.

Now, the angular momentum of the ith particle will be

Then the total torque of the whole system will be 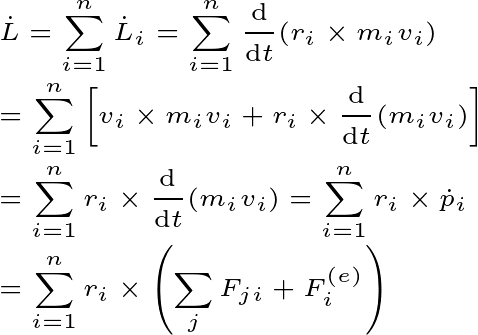 So, here the sum of torque by internal force and external force will be equal to the total torque of the group of particles. 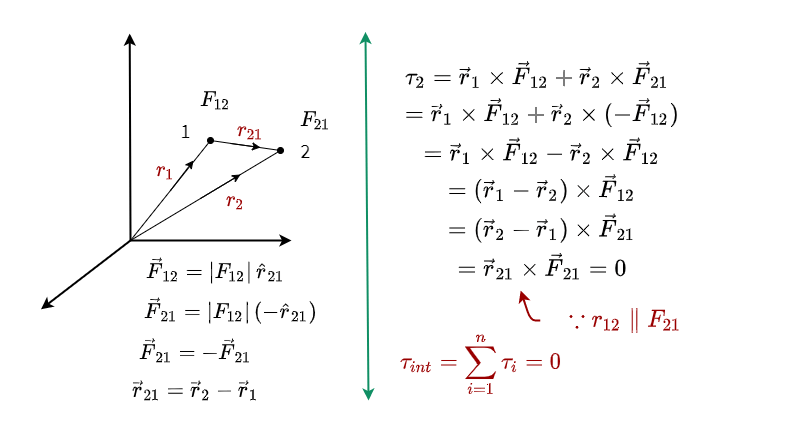 If you look at the picture above, you can see that the total torque between the two particles will be equal to the cross product of displacement vector and internal force. And the displacement vector and the internal force are parallel to this system. That is, the cross product will be zero. That is, the total torque of the two-particle systems is zero.

Then we can say that the total torque of a system with N particles by internal force will be zero.

Conservation momentum of a system

The total external force on a system is equal to the rate of change of momentum with respect to time. So, we can write

Similarly, if the total torque on a system is zero then the angular momentum of that system will always be constant.

That is, the system will continue to rotate with an equal angular velocity(ω).

Kinetic Energy and Potential Energy of a System of Particles

When a system is in motion or changes position, the system gains some kind of energy. If the system is located in the conservation force field then the total energy of the system will always be constant.

The amount of energy that is gained for the dynamic state of a system is called the kinetic energy of that system.

Suppose there is a system of mass moving from point 1 to point 2. And m external force on the system is being applied. Then the total work done of the system will be 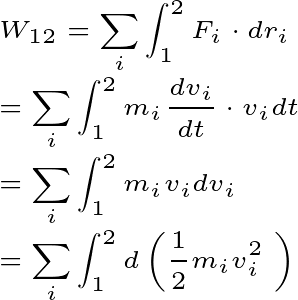 Therefore, the total Work done of the system will be

The amount of energy that a system gains or loses to change its position is called the potential energy of that system.

Thus, total work done of the system will be equal to the potential energy of external force and internal force.

The potential energy of the system will be zero by the internal force. So, look at this proof below

So, the total potential energy of the system here will depend entirely on the external force.

Here Φr is the total potential energy of the system in a given position. And r is the position of the system.

Conservation energy of the system of particles

When the system is in the conservation force field, the system has total energy constant. That is, Work done will be equal in both cases when the system remains dynamic and changes position.

Here are some standard problems discussed so that your concept will be clearer in a more beautiful way.

Problem1 Suppose you take a system of n charged particles. So, what is the total internal force of the system in that case?

Problem2 What will be the total potential energy in the case of N charged particles?

If you look at the jth particle, then the total potential energy will be due to the N-1 charge particle.