A physical quantity is a quantity whose physical properties you can measure. Such as mass, force, velocity, displacement, temperature, etc.

In general, we will divide the physical quantity into three types 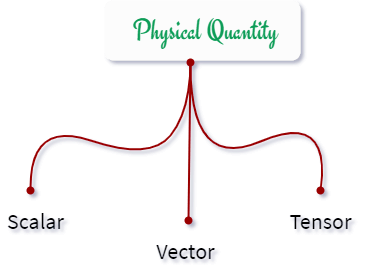 In this tutorial, we will only discuss vector quantity. But before that, let’s talk about scalar.

We will call the scalar quantity the physical quantity which has a value but does not have a specific direction.

Suppose you are allowed to measure the mass of an object. So, you do not need to specify any direction when you determine the mass of this object. That is, mass is a scalar quantity.

There are many physical quantities like this that do not need to specify direction when specifying measurable properties. Such as temperature, speed, distance, mass, etc.

Introduction to Vector in Physics

Simply put, vectors are those physical quantities that have values ​​as well as specific directions. Such as displacement, velocity, etc.

That is, you need to describe the direction of the quantity with the measurable properties of the physical quantity here.

Analytically, a vector is represented by an arrow above the letter. And the value of the vector is always denoted by the mod 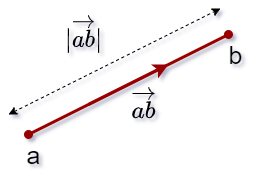 Types of Vectors in Physics

We can divide the vector into different types according to the direction, value, and position of the vector. For example

When two or more vectors have equal values ​​and directions, they are called equal vectors. That is, the initial and final points of each vector may be different. But, the direction can always be the same. So, look at the figure below, here are three vectors are taken. 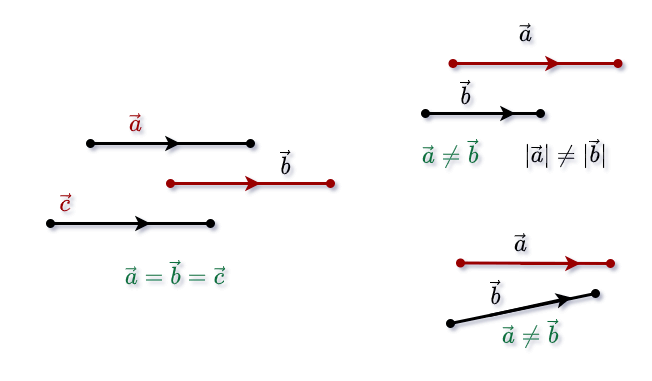 That is, each vector will be at an angle of 0 degrees or 180 degrees with all other vectors. Notice in the figure below that each vector here is along the x-axis. 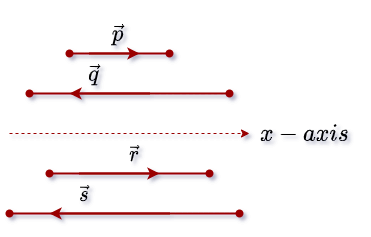 Here both equal vector and opposite vector are collinear vectors. 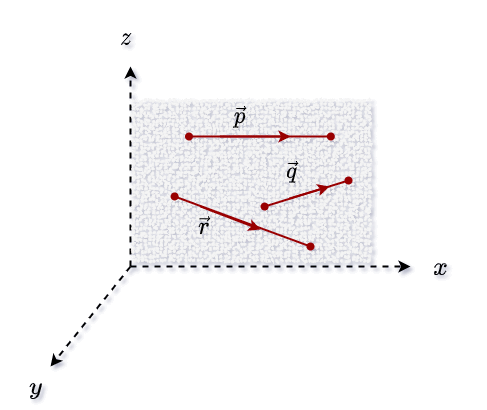 The absolute value of a vector is a scalar. That is, by multiplying the unit vector in the direction of that vector with that absolute value, the complete vector can be found. So, look at the figure below. 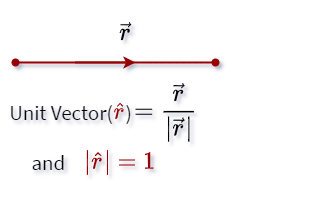 Unit vectors are usually used to describe a specified direction

If the initial point and the final point of the directional segment of a vector are the same, then the segment becomes a point. Thus, this type of vector is called a null vector. Thus, it is a vector whose value is zero and it has no specific direction.

Suppose a particle is moving in free space. And the particle T started its journey from one point and came back to that point again i.e. displacement of the particle will be zero. Thus, since the displacement is the vector quantity. So in this case x will be the vector. 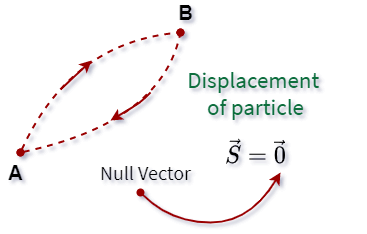 Thus, null vectors are very important in terms of use in vector algebra.

You may have many questions in your mind that what is the difference between vector algebra and linear algebra?

When you perform an operation with linear algebra, you only use the scalar quantity value for calculations. However, vector algebra requires the use of both values ​​and directions for vector calculations.

Suppose a particle first moves from point O to point A. And then the particle moved from point A to point B. Then the total displacement of the particle will be OB. That is if the OB vector is denoted by $\vec{c}$ here, $\vec{c}$ is the resultant vector of the  $\vec{a}$ and  $\vec{b}$ vectors. 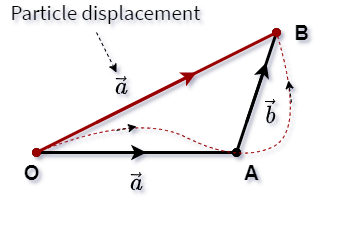 So, we can write the resultant vector in this way according to the rules of vector addition.

That is, according to the above discussion, we can say that the resultant vector is the result of the addition of multiple vectors.

You have to follow two laws to easily represent the addition of vectors. 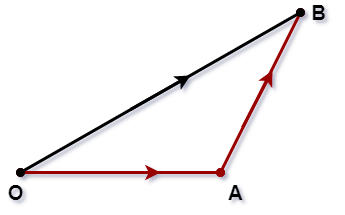 That is, if two sides of a triangle rotate clockwise, then the third arm of the triangle rotates counterclockwise. So, take a look at this figure below to understand easily. 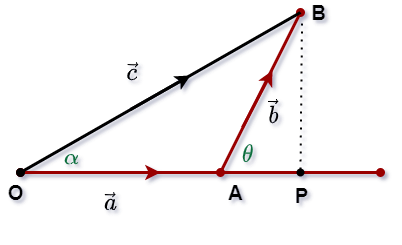 And if you do algebraic calculations, the value of c will be

The parallelogram of the vector is actually an alternative to the triangle formula of the vector. Thus, the sum of two vectors is also determined using this formula.

Thus, the value of the resultant vector will be according to this formula

And the resultant vector is located at an angle OA with the θ vector. That is

Some Special Cases of vector Addition

The following are some special cases to make vector calculation easier to represent.

3. a=b and α=180° : Here the two vectors are of equal value and are in opposite directions to each other. In this case, the absolute value of the resultant vector will be zero. That is, the resolution vector is a null vector

2. α=90° : If the angle between the two vectors is 90 degrees. The value of cosθ will be zero. So, here the resultant vector will follow the formula of Pythagoras

According to the rules of general algebra, subtraction is represented

Subtracting a number with a positive number gives the same result as adding a negative number of exactly the same number. This same rule applies to vector subtraction.

The segments OQ and OS indicate the values ​​and directions of the two vectors a and b, respectively. QO is extended to P in such a way that PO is equal to OQ. As a result, vectors $\vec{OQ}$ and $\vec{OP}$ will be two opposite vectors.

Vector multiplication does not mean dot product and cross product here. Rather, the vector is being multiplied by the scalar. 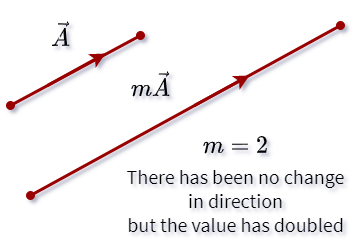 So, you can multiply by scalar on both sides of the equation like linear algebra.

Suppose a vector is taken here

And if you multiply by scalar on both sides, the vector will be.

Many of you may know the concept of a unit vector. And if you multiply the absolute vector of a vector by the unit vector of that vector, then the whole vector is found. So, notice below

In the same way, if a vector has to be converted to another direction, then the absolute value of the vector must be multiplied by the unit vector of that direction.

With the help of vector division, you can divide any vector by scalar. For example

You may know that when a unit vector is determined, the vector is divided by the absolute value of that vector.

If a vector is divided into two or more vectors in such a way that the original vector is the resultant vector of the divided parts. Then those divided parts are called the components of the vector.

Dividing a vector into two components in the process of vector division will solve almost all kinds of problems. Thus, it goes without saying that vector algebra has no practical application of the process of division into many components.

So, below we will discuss how to divide a vector into two components.

First, you notice the figure below, where two axial Cartesian coordinates are taken to divide the vector into two components. And the R vector is located at an angle θ with the x-axis. 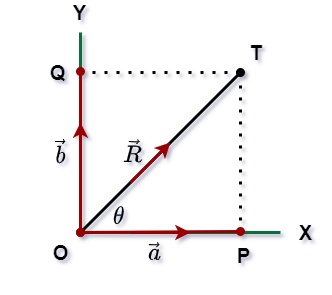 And the R vector is divided by two axes OX and OY perpendicular to each other. 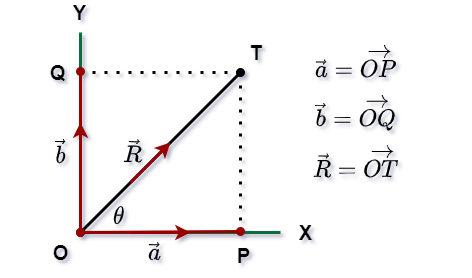 According to the given formula,

Thus, the component along the x-axis of the $\vec{R}$ vector is

Vector Multiplication(by a vector) in Physics

When you multiply two vectors, the result can be in both vector and scalar quantities.

Here force and displacement are both vector quantities, but their product is work done, which is a scalar quantity. Such a product is called a scalar product or dot product of two vectors.

And such multiplication is expressed mathematically with a dot(•) mark between two vectors.

So, if two vectors a, b and the angle between them are theta, then their dot product value will be

Some properties of scalar product

Thus, if the same vector is taken twice, the angle between the two vectors will be zero. Here will be the value of the dot product.

If you move from a to b then the angle between them will be θ. But, in the opposite direction i.e. if you rotate from b to a then the angle will be -θ.

3. If two vectors are perpendicular to each other, the scalar product of the two vectors will be zero.

Suppose two vectors a and b are taken here, and the angle between them is θ=90°. then

4. If the angle between two vectors is θ

6. It is possible to determine the scalar product of two vectors by coordinates.

The product of two vectors can be a vector. For Example

Here both the angular velocity and the position vector are vector quantities. And their product linear velocity is also a vector quantity. This type of product is called a vector product.
Such multiplication is expressed mathematically with a cross mark between two vectors. For example

Here if the angle between the a and b vectors is θ, you can express the cross product in this way.

Thus, the direction of the cross product will always be perpendicular to the plane of the vectors. So look at this figure below

And the distance from the origin of the particle

When the position of a point in the respect of a specified coordinate system is represented by a vector, it is called the position vector of that particular point.

Suppose a particle is moving from point A to point B. And here the position vectors of points a and b are r1, r2. Then the displacement vector of the particle will be 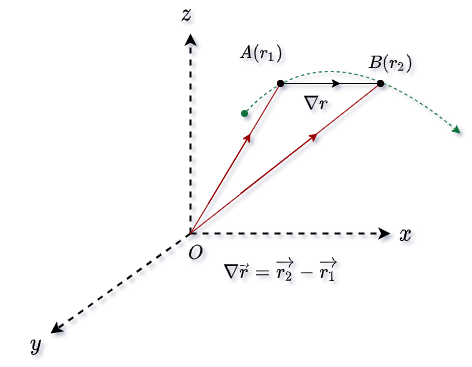 In physics, magnitude is a pure number that defines the…